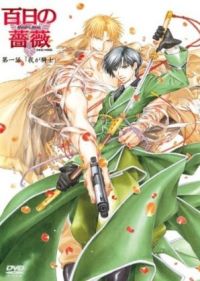 Klaus von Wolfstadt met Taki Reizen in 1918. Klaus and his family (parents, brother and sister) visited the Far Eastern country to attend the coronation ceremony. After having gotten lost in the gardens surrounding the area, he stumbled upon a young Taki, who asked him to help him pick some flowers from one of the trees above them to place them on his ceremonial headgear. Klaus agreed, and after picking the flowers for Taki, Taki asked Klaus if he would give himself to him and be his knight. Nine years later, Taki and Klaus met again at Luckenwalde Military Academy, where Taki had gone to learn how to operate tanks. Klaus was given orders to befriend Taki, and both observe and protect him. Through the course of the year, the two fell in love. When Eurote broke a treaty with the Western Alliance and invaded Dheedene, Taki was ordered to be deported back to his country. The night after he was ordered to be sent home, he and Klaus had their first romantic encounter. A few days later, they met at Luckenwalde station, and rode on a train heading back to Taki's country. During the train ride home, Klaus nearly took Taki's purity, in a moment of passion. However, Taki, being a member of the Reizen family which is favored by the Gods, has the burden of remaining celibate until marriage. Considering the consequences on himself and on the people who believe in him, Taki ended his relationship with Klaus, but only after Klaus was sworn to him as his knight. This binds the two together for the rest of their lives. Klaus, confused and angered, became very abusive to Taki, and began to sexually harass him consistently afterwards. Now the two have to fight in both the war between Taki's country and the Western Alliance, and the war between each other.