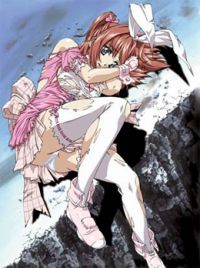 V.G.NEO is a legendary battle that has been held over several decades to find the strongest waitress. Asuka Yuu arranges with her brother-in-law to live with him and work in his cafe. Suddenly, the enormous debt she owes to her brother-in-law becomes too costly. In order to repay the money, she joins the Virgin Goodness League which is a battle of waitresses set on one of the most enormous luxury liners in the world. An unknown sponsor promises enormous prizes for victory, but the loser will have to bear the ultimate humiliation. The maidens who will change fate cannot lose these one on one matches or they will suffer the consequences.