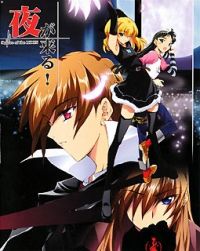 A second moon of dark blue suddenly appeared near to the original moon in the sky, they called it the "True Moon". Strange monsters started to appear on the streets, raping women. 3 years after the True Moon's appearence, a monster appeared in front of Ryou. He ran away from the monster, but finally, it cornered him. Escape looking impossible, he began to accept his death.. but then, a red eyed girl named Izumi suddenly appeared. She cut the monster to death with ease, using what appeared to be a sythe.. and then, she was gone. How is all this connected with the appearance of a second moon in the sky, and what does Izumi have to do with it? Ryou may just have to find out the hard way.