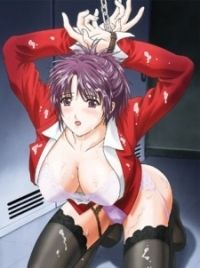 Professor Yuuki Ayaka is the daughter of a chairmen that runs a famous Academy. With bright eyes, luscious breasts & a wonderful body to die for. She's the envy of all teachers, Professor Sayo & her students for they all look up to her. She becomes the coach of the karate club & entices new students to sign up. But given numerous complaints from the students that she's "punished". Many of those whom were delinquents, forced her to continuously overstep her boundaries to teach them lessons besides the usual school curriculum. Even Professor Kitano stood to defend her from chairmen's decision of suspending her. But recently a new student named Togawa, who isn't afraid of an uptight teacher decides to have his way with Ayaka. One interesting night enough in the gym women's shower room, Togawa hears of a female moaning and finds Ayaka masturbating. Ayaka isn't completely complaining but in her moment of pleasurable bliss, this is the least of things she wants to confront... Togawa.